This report describes the activities of Wikimedia District of Columbia from October 1, 2014 through December 31, 2014.

"Houses in First Street Northeast Which Are to Make Way for the First Street Tunnel", a 1904 photograph uploaded at the DC Neighborhoods event

At the Art+Feminism edit-a-thon at American University, five participants made 31 edits to 10 articles, including Alice Baber, Deborah Willis, Emma Amos, and May Howard Jackson. In total, 6,998 bytes were added or removed.

The DC Neighborhoods event featured a novel approach to introducing Wikipedia to newcomers. Rather than focusing on making several edits, the purpose of the event was for newcomers to make just their first edit, based on a curated list of editing tasks. Nine participants at the event, including four newcomers, made 22 edits to 12 articles, including Adams Morgan, Swampoodle, Brookland, and Shepherd Park. One image was uploaded to Wikimedia Commons. In total, 12,998 bytes of content were added or removed.

In total, 25 people participated at these events, including two people who attended two or more events within the quarter. These participants made a total of 79 edits to 30 articles, uploaded one file, and changed 29,573 bytes of content. Of the 25 participants, 11 were newcomers at Wikimedia DC events, each attending only one event. 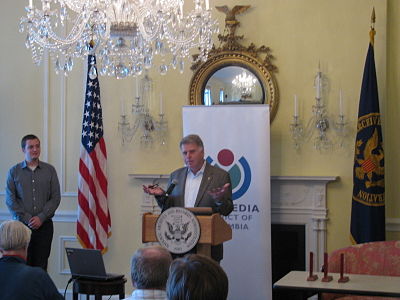 In addition to these three editing events, Wikimedia DC held two WikiSalons on October 22 and December 18, and two dinner meetups on November 8 and December 14.

Wikimedia DC held its Annual Membership Meeting on October 18 at the National Archives Building. At the meeting, the President of Wikimedia DC presented the Distinguished Service Award to Andrew Lih and the Volunteer of the Year Award to Jim Hayes and Kristin Anderson, and the members voted to approve the budget for the 2014–15 fiscal year.

The Board of Directors held three meetings during the quarter, on October 12, October 17, and December 14. Business conducted at these meetings included the preparation and approval of the 2013–14 annual report and annual financial report, as well as the 2014–15 annual plan and annual budget.