Activity Report for the Second Quarter of Fiscal Year 2013–14

This report describes the activities of Wikimedia District of Columbia from January 1, 2014 through March 31, 2014.

During the quarter, Wikimedia DC held four edit-a-thons, all in partnership with local cultural institutions. A total of 47 volunteers participated in the three edit-a-thons where we were able to collect data. This includes:

In total, as of the end of the quarter, a total of 75 volunteers have participated in Wikimedia DC edit-a-thons, which is 150% of the goal set for the fiscal year. Press coverage, including an interview with NPR's Scott Simon that aired on the eve of the Women in the Arts Edit-a-Thon, helped drive attendance at these events, as have active recruitment efforts on the part of the host institutions.

Wikimedia DC also participated in a scan-a-thon at the National Archives which occurred on February 25. This scan-a-thon, as well as two of the edit-a-thons, were held in conjunction with Andrew Lih's class at American University on Wikipedia and public knowledge. Wikimedia DC has been actively working with Professor Lih and his class; in January, Wikimedia DC surveyed his students on their experiences editing Wikipedia and their attitudes toward Wikipedia. At the end of the academic semester, we will administer a follow-up survey to determine the effect of the class and these activities on their editing skills and their attitudes toward Wikipedia. We would like to thank Professor Lih and his class for their contributions to the Wikimedia movement in Washington, DC. 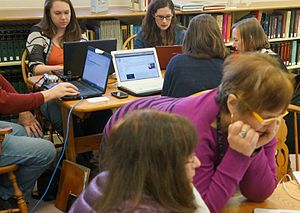 Attendees hard at work at the Art and Feminism Edit-a-Thon. View more pictures from the event. 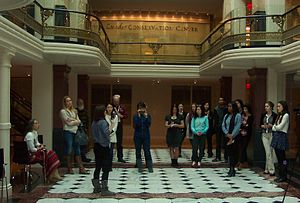 Attendees at the Women in the Arts 2014 Edit-a-Thon. View more pictures from the event.

The follow-up Women in the Arts edit-a-thon brought the initiative of the first Art and Feminism edit-a-thon to prominence. The event, covered by NPR and the BBC, attracted at least 23 attendees to the main atrium of the National Museum of Women in the Arts. Sara Snyder gave an introduction on editing Wikipedia. Twelve newcomers participated during the edit-a-thon, six of which contributed 10,313 bytes of content across 20 edits, creating or improving five articles: Barbara London, Helena Almeida, John Koskinen, Mabel May, Mary Anne Barkhouse. Seven of the eight experienced editors in attendance contributed 14,164 bytes of content across 62 edits, creating or improving 15 articles. These articles include Barbara London, Feminist art movement in the United States, Harriete Estel Berman, and Helena Almeida.

The American Art edit-a-thon was held on February 1 with students from Andrew Lih's class. The event included a tour of the Luce Foundation Center and an introduction by Bridget Callahan from the same. The 12 participants, all with experience editing Wikipedia by the time of the event, contributed 10,655 bytes across 67 edits, improving 18 articles. Improved articles include Lola Alvarez Bravo, Ferdinand Pettrich, James Hampton, and Miriam Schapiro. 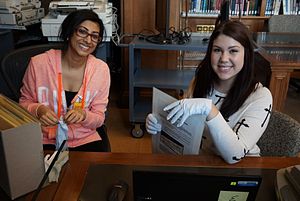 Participants at the scan-a-thon at the National Archives.

Our first scan-a-thon was held at the National Archives on February 25 as part of their Citizen Archivist program. The goal of the Citizen Archivist program is to encourage volunteers to scan documents in the holdings of the National Archives, including photographs and other records of the federal government. The scanned documents, after being processed by a professional archivist, are then uploaded to Wikimedia Commons. The event, held with Andrew Lih's students, resulted in 116 digitized records, including a letter to Jefferson Davis from Robert E. Lee.

The Citizen Archivist program is still in its beginning stages. Much of the workflow needs improvement; it took two months for the scanned images to be posted online, and as of writing, the images have not yet been uploaded to Wikimedia Commons. Regardless we see an opportunity for DC-area Wikipedians to improve Wikipedia using primary source material from the National Archives, and we would ultimately like to see the Citizen Archivist model replicated at other archival institutions. Anyone can participate as a citizen archivist by contacting Dominic McDevitt-Parks at dominic

wikimediadc.org to set up an appointment.

Four social events were held during the quarter, including dinner meetups on January 25 and March 23, an afternoon WikiSalon on February 23, and an evening WikiSalon on March 12.

The chapter established a committee on public policy issues. The committee launched with an immediate project, to draft comments for a panel at the US Copyright Office on Orphan works. These are works whose copyright holder cannot be identified or cannot be located, so permission to use the work cannot be obtained. Some such works would be useful but fall into oblivion because of this gap in coverage, and the US copyright office has made constructive proposals to change the law.

Our consensus view at Wikimedia DC is that we want such works to be usable on Wikipedia, noting that that they are "orphan works" in the category systems for media files. The copyright status may then change when a copyright-holder is discovered, in which case we would remove the files. We made comments at the public panel. In response to the Copyright Office's request for written comments, the committee drafted a statement. After review and polishing, we expect this to be the chapter's first published statement drafted by the committee.

Members of the committee attended a Supreme Court case on software patents, Alice Corp. v. CLS Bank International, and we are accumulating expertise on this topic.

The Board of Directors held meetings during this quarter on January 11, February 8, March 8, and March 29. The Board adopted a revised Whistleblower Policy, modifications to the Friendly Space Policy, and a new Ethics Policy. The Board also approved the Wikipedia Summer of Monuments project and established a project manager contract position for the project, our first paid staff since 2012.

Wikimedia DC made substantial progress in its operational goals for programs during the first half of this fiscal year. We have held edit-a-thons with three institutions (Laurel Historical Society, National Museum of Women in the Arts, and the Smithsonian Institution), two of which are organizations that had not previously hosted events with us. We also have events with three more institutions scheduled during this fiscal year. This brings us to six institutions, just two short of our goal. We expect to find an additional two institutions to partner with before the end of the year.

The Smithsonian Institution is a vast, multifaceted organization of high strategic interest, so we established a Smithsonian-specific goal of hosting six events with them. As of the end of the quarter, we have hosted events with three units (American Art/Portrait Gallery Library, American Art Museum, and Smithsonian Institution Archives). We have since held an event with the Museum of the American Indian, and we have two additional events planned. We will thus fulfill our goal of six Smithsonian events by the end of the fiscal year. We are also maintaining a strong relationship with the National Archives and Records Administration. We held one scan-a-thon so far, yet we have digitized double the amount of documents we sought to digitize by the end of the year.

We have made exceptional progress in reaching out to individual volunteers for our content programs. Our annual plan set a goal for 50 volunteers contributing at least 700 volunteer-hours by the end of the fiscal year. We hit 75 volunteers at the end of the second quarter, logging 470 hours. A volunteer is a participant at an event, while volunteer-hours are calculated by multiplying the number of attendees by the length of an event. This measure is imperfect but gives an approximate sense of time commitment that cannot be measured by raw edits. Measured in terms of contributions to Wikipedia, these volunteers have, as of the end of the quarter, created or improved 131 articles (out of the goal of 175). We expect to exceed our targets for volunteer involvement by the end of the fiscal year.

Much of our success involves areas where Wikimedia DC has traditionally been strong; we have been nurturing cultural partnerships for years. The work of developing technology programs has been more difficult. Our original goal has been to hold one technical event per quarter, starting with the second quarter. We had to defer hosting our first such event to April, which will be reported in our Q3 report. Despite the delayed start, we expect to be on target by the end of the fiscal year, with the exception of the analytics toolset which may be delayed.

Our progress with content and technology programs has come at the expense of community programs—programs which work to facilitate the development of Wikimedia DC as a thriving volunteer community. We expected in our annual plan to hold two social events per month, while we have only hosted seven social events in six months. Our events do build community, by offering a collegial and safe environment for newcomers to acquaint themselves with editing Wikimedia. We are also making adequate progress with our flagship events, having hosted two flagship events (the Annual Meeting and the Wiki Loves Monuments Exhibition) out of our planned four.

Our annual plan refers to several goals for organizational development for the fiscal year. These goals work to build infrastructure for Wikimedia DC, allowing it to carry out activities in the coming years. We have successfully secured grant funding from the Wikimedia Foundation, including an $8,600 grant for 2014 programs and a $35,000 grant for WikiConference USA. We continue to receive small donations through membership applications, and our fundraising committee is developing a comprehensive fundraising plan for the remainder of this fiscal year.

Earlier this fiscal year we modified our advisory committee structure. These changes reflect the Board of Directors' wish to including more people in running the organization. We established three programs committees, reflecting our three program areas, and a communications committee to improve our press outreach. The already-existing fundraising committee is now expected to prepare an annual fundraising plan. While the Content Programs and Technology Programs Committees have been active in advising the President and the Board of Directors, the Community Programs and Communications Committees do not yet have members. We will seek to rectify this by the end of the fiscal year. We hope to appoint partnership coordinators by the end of the fiscal year as well.

We have made little progress on our technical and volunteer infrastructure. By the end of the fiscal year, we need to design a volunteer workflow, to restructure the website to reflect the new program areas and to make it more useful to the general public, and to research internal communication and teleconferencing technology. While we did not implement a constituent relationship manager by the end of the second quarter, we have since done so.