During the fourth quarter, Wikimedia DC supported a total of five edit-a-thons across the region, including three in Washington, DC, and two in Maryland. All of these events were held in partnership with other institutions, including universities and historical societies. 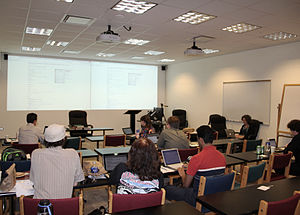 On September 27–28, Wikimedia DC and the National Archives and Records Administration hosted the second Open Government WikiHack. James Forrester of the Wikimedia Foundation presented an introduction to Wikidata, and several Wikidata-related projects were started by participants. According to follow-up surveys, 75% of participants were mostly or completely satisfied with the amount they accomplished during the WikiHack.