This report describes the activities of Wikimedia District of Columbia during Fiscal Year 2011–12, covering the period from October 2011 through September 2012.

The theme for Wikimania 2012 was “Explore. Engage. Empower.” It was born out of the organizers’ hope that those coming to Wikimania, whether from close or far away, would use the conference as an opportunity to explore new and exciting possibilities, engage in active discussions and dialogue, and take what was learned back with them in order to continue to empower people around the world through free access to global knowledge.

The conference was the largest such event to date, with more than 1,400 attendees from 87 countries. Over 700 people attended the Wikimania 2012 Google Opening Reception at the Library of Congress, and more than 1,200 participated in the opening ceremony, which featured keynote speeches from Ada Initiative co-founder Mary Gardiner and Wikipedia founder Jimmy Wales. The conference program included more than 275 speakers, many of whom are active contributors to Wikimedia projects, including the Executive Director of the Wikimedia Foundation, Sue Gardner, and the Wikimedia Foundation Board of Trustees.

In addition to the regular conference program, Wikimania 2012 featured a series of Tech@State events, which were organized in collaboration with the Department of State. More than 200 attendees participated in Tech@State, and Richard Boly of the Office of eDiplomacy at the Department of State shared a letter from Secretary of State Hillary Clinton congratulating Wikimedia DC on the opening of the conference.

Among those who delivered keynotes at the conference was David Ferriero, the Archivist of the United States. In his remarks at the closing ceremony, Ferriero discussed the important role that Wikipedia and Wikimedia Projects have for preserving history and documenting cultural heritage. After reminding the audience that the National Archives has contributed more than 120,000 digital files and pictures to Wikimedia Commons, he told the crowd, “if Wikipedia is good enough for the Archivist of the United States, then it’s good enough for you.”

Kat Walsh, the Chair of the Wikimedia Foundation Board of Trustees, praised Wikimedia DC following the conclusion of the conference. “The organizing team did an amazing job putting on the largest Wikimania ever,” Walsh said, “bringing together people from all of the various parts of our movement around the globe and presenting a full program of talks, tours, and workshops. My congratulations and thanks for the great work they’ve done.”

During Fiscal Year 2011–12, Wikimedia District of Columbia defined five key program areas for its outreach and educational efforts. These key areas include:

Over the course of the year, Wikimedia DC successfully conducted outreach and educational activities in all five areas.

In August, Dominic McDevitt-Parks, the Wikipedian-in-Residence at the National Archives and Records Administration, spoke at the Library of Congress. The talk, entitled “Cultural Institutions and Wikipedia: a Mutually Beneficial Relationship”, outlined the potential for symbiotic relationships between Wikipedia and cultural institutions. Dominic was introduced by Kristin Anderson, a member of the Wikimedia DC Board of Directors, who described the Wikipedian community to the audience by saying that “the only people who like information as much as library catalogers are Wikipedians…. Wikipedia and the Library of Congress share Thomas Jefferson’s dream of… information for everyone.”

As part of the outreach efforts centered around Wikimania 2012, Wikimedia DC built partnerships with numerous government agencies, including the Office of eDiplomacy at the Department of State; the National Archives and Records Administration; and the Library of Congress.

In April, Wikimedia DC partnered with the Washington European Society and the Estonian Embassy in Washington to present the first of its embassy outreach events. The event, entitled "Internet Freedom & Open Government: An International Conversation", featured a panel discussion with Danny Weitzner, Deputy CTO for Internet Policy at the White House Office of Science & Technology Policy; Chairman Marko Mihkelson, Chairman of the Foreign Affairs Committee of the Estonian Parliament; Ian Schuler, Senior Manager for Internet Freedom Programs at the Department of State; and Rebecca MacKinnon, Bernard L. Schwartz senior fellow at the New America Foundation and a member of the Wikimedia Foundation Advisory Board. Adam Kushner, Deputy Editor of the National Journal, moderated the discussion.

In July, Wikimedia DC partnered with the Austrian Cultural Forum Washington to present "From Mozart to Michael Jackson", a cultural event at the Austrian Embassy in Washington. Speaking at the event, Wikimedia DC President Nicholas Bashour told the attendees that the event was only the tip of the iceberg, and that Wikimedia DC was actively looking for more opportunities to reach out to an international audience.

In June, Wikimedia DC partnered with the Sunlight Foundation to present an event on the future of open data development. The event, entitled "Wikidata & Global Open Data: A Roundtable Discussion", featured a panel discussion with Josh Tauberer, creator of GovTrack.us and author of Open Government Data: The Book; Andrew Pendleton, programmer at the Sunlight Foundation; and Katie Filbert, Wikidata programmer at Wikimedia Deutschland and member of the Wikimedia DC Board of Directors.

On several occasions over the course of the year, Wikimedia DC collaborated with the Adaptive Services Division at the Martin Luther King Jr. Memorial Library to host "Editing for the Blind" events. Using the JAWS screenreader, groups of blind library patrons created Wikipedia articles for a number of books, including Hard Revolution and Fallen Grace.

In May, Wikimedia DC participated in the "Great American Wiknic" campaign, holding outreach picnics in Washington, DC and in Frederick, Maryland.

The membership of Wikimedia DC continued to grow at a steady rate throughout the year, increasing to a total of 57 members by the end of September. 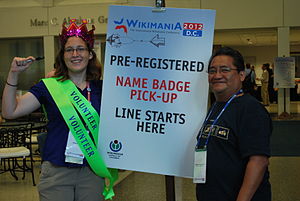 Wikimedia DC retained Lisa Marrs as an Outreach & Program Coordination Intern from June through September. Lisa's contributions were crucial to Wikimedia DC's successful accomplishment of its goals over the past year, particularly with regards to outreach and the organization of the Wikimania 2012 conference.

Wikimedia DC continued to emphasize good governance practices as a key element of organizational growth, and developed a number of policies to formalize and streamline its internal processes. New policies enacted over the course of the year include a Board Meeting Policy, a Delegation of Authority Policy, a Grants Policy, an Election Policy, a Membership Policy, and a Movement Accountability Policy.

In addition, Wikimedia DC enacted a number of employment-related policies in preparation for hiring staff to assist with the organization of the Wikimania 2012 conference. These policies include a Hiring Policy, an Employment Policy, an Employee Attendance and Leave Policy, and a Non-Discrimination Policy.

In March, Wikimedia DC President Nicholas Bashour and Board of Directors member Kristin Anderson traveled to Berlin for the 2012 Wikimedia Conference and helped negotiate the Berlin Agreement among the Wikimedia chapters.

Additional details regarding Wikimedia DC income and spending over the past year may be found in the Annual Financial Report for Fiscal Year 2011–12.