Wikimedia DC has presented Distinguished Service Awards and Volunteer of the Year Awards for three years. 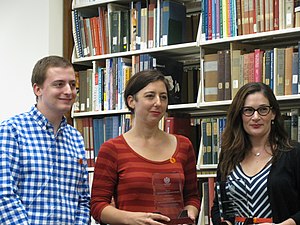 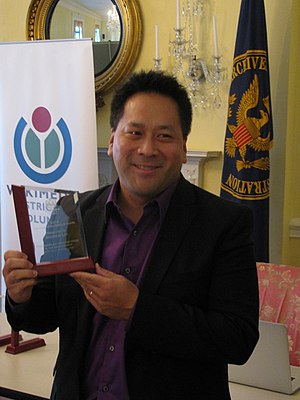 At our 2013 Annual Meeting, the inaugural Distinguished Service Award was awarded to Sara Snyder and Effie Kapsalis in recognition of their work within the Smithsonian Institution to encourage people to learn how to edit Wikipedia.

At our October, 2014 annual meeting, Andrew Lih received the 2014 Distinguished Service Award, and Kristin Anderson and Jim Hayes each received our 2014 Volunteer of the Year Award. The following commendations were read:

Wikimedia District of Columbia awards its 2014 Volunteer of the Year Award to Kristin Anderson and Jim Hayes for their dedication to the advancement of public knowledge and the collection, development, and dissemination of educational content.

Kristin and Jim have demonstrated exemplary commitment, regularly devoting their time to attend and enhance our events. They are enthusiastic, friendly, and welcoming to newcomers to Wikimedia. They eagerly help others learn about the Wikimedia projects.

Jim serves on our Public Policy Committee and presented on Capitol Hill about Wikimedia. He is an active editor on Wikisource and posted many, many images on Wikimedia Commons. He trains others on Wikimedia at almost every event we hold.

We thank them for their service to Wikimedia District of Columbia and to the Wikimedia movement, and look forward to their continued participation in our volunteer programs.

At our 2015 annual meeting, the following commendations were read in our awards to Veronica Erb, Gerald Shields, and Rosie Stephenson-Goodnight:

Wikimedia District of Columbia awards its 2015 Distinguished Service Award to Veronica Erb of National Public Radio for exemplary contributions to the advancement of public knowledge and the collection, development, and dissemination of educational content.

Over the past year, Veronica has worked closely with Wikimedia District of Columbia to organize a number of edit-a-thons. The themes of these events, which included topics such as Black History and Hispanic Heritage, were designed to recruit editors from traditionally under-represented communities and to improve areas within Wikipedia that are particularly subject to systemic bias, and furthered our strategic aim of fostering diverse participation in all areas of the Wikimedia movement.

As the organizer of these events, Veronica pioneered a novel approach to teaching newcomers to edit Wikipedia: a first-time editor would partner with an experienced volunteer, choose a small editing task from a bowl containing recommended tasks that had been curated ahead of time, and work together to make their first edit. This form of guided instructional editing holds great promise for future Wikipedia editor recruitment and training programs.

Wikimedia District of Columbia looks forward to continuing our collaboration with Veronica to improve the Wikimedia projects and to develop innovative new approaches to teaching first-time editors.

Wikimedia District of Columbia awards its 2015 Volunteer of the Year Award to Gerald Shields and Rosie Stephenson-Goodknight for their dedication to the advancement of public knowledge and the collection, development, and dissemination of educational content.

A long-time participant in our programs, Gerald has demonstrated extraordinary commitment to Wikimedia District of Columbia, regularly devoting his time to attend our events, support event organizers, and assist newcomers at events. He has been one of our principal event photographers for the past several years, and his work has been regularly featured in our public reports, press materials, and social media postings.

A graduate of one of our training workshops and an organizer of our partner organization, the WikiWomen's User Group, Rosie is active in organizing online and offline activities that recruit new editors, combat systemic bias, and develop exemplary content in under-represented areas of Wikipedia. Her contribution to the scholarship review process for WikiConference USA 2015 was crucial to the success of the event.

We thank Gerald and Rosie for their service to Wikimedia District of Columbia and to the Wikimedia movement, and look forward to their continued participation in our volunteer programs.