This report describes the activities of Wikimedia District of Columbia from April 1, 2015 through June 30, 2015.

Ephemera of the DC Cowboys, photographed at the Wiki Loves Pride event

Wiki Loves Pride, an international campaign to improve coverage of LGBT History on Wikimedia projects, featured a tour of the National Museum of American History, including a tour of the museum's LGBT archives. During the edit-a-thon, 9 participants made 52 edits to 21 articles, including National Organization of Gay and Lesbian Scientists and Technical Professionals, National Black Feminist Organization, and List of LGBT periodicals. One image was uploaded, and 53,448 bytes of content were added or removed. 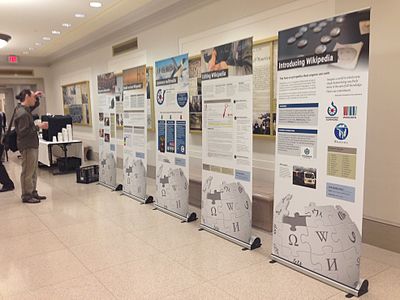 In addition, Wikimedia DC held a Wikipedia Space Hack-a-Thon at the National Archives Innovation Hub on April 14. The goal of the event was to plan the Wikipedia Space, a project by American University professor Andrew Lih to design a traveling exhibit to describe Wikipedia.

Wikimedia DC held monthly WikiSalons on April 8, May 13, and June 10, and monthly dinner meetups on April 25 and May 30.

The Board of Directors held two meetings during the quarter, on April 25 and June 21. At the April meeting, the Board lowered Wikimedia DC's annual membership dues to $5 per year.

The Board additionally held a two-day strategy workshop on June 20–21. At the workshop, the Board reviewed Wikimedia DC's strategic priorities, identified long-term goals for the organization, and developed program ideas in furtherance of those goals. This work will inform Wikimedia DC's 2015–20 strategic plan, which will be published during the 2015–16 fiscal year.