Activity Report for the Third Quarter of Fiscal Year 2013–14

This report describes the activities of Wikimedia District of Columbia from April 1, 2014 through June 30, 2014.

During the third quarter, Wikimedia DC supported a total of nine edit-a-thons across the region, including seven in Washington, DC, one in Frederick, MD, and one at the University of Delaware. All of these events were held in partnership with other institutions, including universities and libraries. A total of 73 volunteers participated in the six edit-a-thons for which we were able to collect data, which is 155.3% of the attendance rate for the prior quarter. The participating volunteers include:

In total, as of the end of the quarter, a total of 124 volunteers have participated in Wikimedia DC edit-a-thons, which is 248% of the goal set for the fiscal year and an increase of 39.5% since the last quarter. These volunteers contributed:

The Colored Conventions Edit-a-Thon in progress. View more pictures of the event »

Attendees at the Wikipedia APA Edit-a-Thon 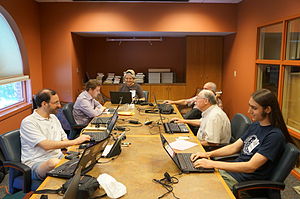 Attendees at the Frederick County History Edit-a-Thon. View more pictures of the event »

We would like to thank James Hare, Kristin Anderson, and Jim Hayes, each of whom helped at most or all of these edit-a-thons. 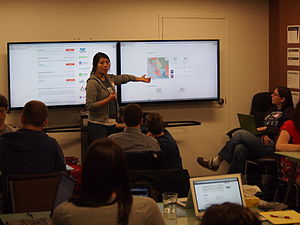 The Open Government WikiHack in progress

The Open Government WikiHack in progress. View more pictures of the event »

Wikimedia DC organized the first Open Government WikiHack on April 5–6; the event was our first hack-a-thon since the Open Data Hack-a-thon in 2011. The event was held in partnership with the Sunlight Foundation and included experienced Wikipedia editors and attendees from various government agencies. The goal of the hack-a-thon was to bridge the gap between open data repositories and Wikimedia projects, namely Wikidata. The work surrounding the event represented Wikimedia DC's largest outreach project to the open data and open government communities to date, as well as our first large effort in recruiting technical volunteers.

Four different projects were developed during the WikiHack: three focusing on importing datasets into Wikidata and one focusing on a general infrastructure for bots editing Wikidata. The dataset-focused projects include:

As one of our first hack-a-thons, the Open Government WikiHack was a valuable learning experience as we experimented with this event format. Wikidata's technical limitations proved to be a limitation, as was the lack of Wikidata expertise in DC. We would stand to benefit from a standard Wikidata presentation, supplemented with an in-person Wikidata expert, either local or flown in from San Francisco while the project is still new. Further, software changes allowing more liberal use of Wikidata will be necessary. We also learned that hack-a-thon facilitation is difficult—while the object of an edit-a-thon is fairly cut and dry, hack-a-thons require more intensive planning. Without clearer planning, it is difficult to navigate volunteer labor toward a defined end-goal. Future hack-a-thons should make use of dedicated facilitators.

We administered a survey following the WikiHack; however, due to a low response rate, we cannot make use of the quantitative measurements taken. Attendees noted in written portions of their survey responses, however, that they appreciated the exposure to Wikidata and the Sunlight Foundation APIs. However, future events should have more brief introductory presentations and should provide better technical assistance.

With the experience of our first WikiHack, we look forward to future WikiHacks and further engagement with the open data community. We would like to thank Maite Fernández and Aamir Khwaja from the Technology Programs Committee, as well as Rebecca Williams, Amy Ngai, and Zubedah Nanfuka at Sunlight for their help planning and facilitating.

Wikimedia DC held evening WikiSalons on May 15 and June 11, as well as dinner meetups on May 17 and June 21.

Attendees at WikiConference USA 2014. View more pictures of the event »

WikiConference USA, held in partnership with Wikimedia New York City, took place on May 30 through June 1. Approximately 250 people from throughout the United States, as well as a handful of Canadians, participated in the three-day event, which featured four keynote speakers and several panels, presentations, and discussions on all manner of topics affecting the Wikimedia community, including the gender gap, paid editing, on-wiki policy and procedure, and offline outreach.

Wikimedia DC was well represented at the conference, with several members of our community attending, presenting, and playing an active role in planning the conference. Our organization in particular was responsible for administering scholarships. We administered 25 scholarships, allowing attendees to travel to the conference from as far away as San Diego, California, and Kelowna, British Columbia.

Wikimedia DC volunteers met with House and Senate staffers on Capitol Hill for briefings on subjects of mutual interest, including copyright rules and support for making cultural content freely available online. We received a friendly reception, like last year. Public Policy Committee member Jim Hayes presented a summary of these briefings at WikiConference USA, and we discussed ideas for future briefings with attendees at the conference.

Wikimedia DC submitted official comments to the U.S. Copyright Office on proposals to handle orphan works, mostly written and edited by Public Policy Committee member John Sadowski. A copy of the submitted comments has been published.

Both the New York and Portland events reported modest turnout, but noted that there is a high potential for a more organized campaign in the future, drawing parallels with the more successful Art+Feminism campaign. Moore recommended the appointment of a specific communications manager for future campaigns, while Howard wrote that future efforts should include securing a more high-profile venue.

The Board of Directors held regular meetings on May 3 and June 8. During these meetings, we joined the Congressional Data Coalition, adopted a fundraising plan for the remainder of the fiscal year, and cast votes for the Wikimedia Foundation Board of Trustees.

We appointed Emily Temple-Wood as Vice President during a special meeting on June 19 following Kristin Anderson's resignation as Vice President and from the Board. We also engaged Leo Zimmermann as our Project Manager for Wikipedia Summer of Monuments on June 1. Congratulations to both!

Wikimedia DC had 72 members as of June 30, representing an increase by one membership over the prior quarter.

As part of our effort to provide organizational support to emerging Wikimedia groups in the United States, we signed a fiscal agent agreement with the New England Wikimedians, authorizing us to serve as their payment processors. We also registered domain names and set up a website (ne-wikimedians.org) on their behalf.

During the third quarter, we began our transition to Insightly for constituent relationship management services. As of the end of the quarter there were over 800 contacts in our database. We prepared this exhaustive database of contacts following a massive reconciliation of over two years' worth of records. There are still challenges but we expect the CRM to be a crucial component in our effort to build institutional memory.