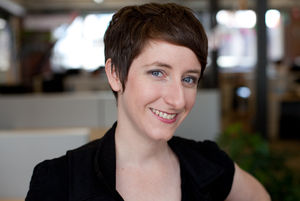 Sarah Stierch is a freelance journalist and photographer based in Sonoma, California. She serves as Food & Drink Editor of the Sonoma Valley Sun and is a grantwriter for Bischoff Consulting. She is the former Wikipedian in Residence at the Smithsonian Institution and Library of Congress and the former Susan B. Miller Fellow at the University of California, Berkeley.

Stierch is a contributor to Sonoma magazine, Huffington Post, and OpenGLAM. Her photographer has been published by the WAMU, ROAR, Washington Post, Motorburn, Red Bull, Nature World News, Buzzfeed, Christian Post, KNPR, Financial Observer, Hilton, and the National Park Service. Her efforts to encourage more women to edit Wikipedia and cultural institutions to partner with Wikimedia has been featured in Smithsonian magazine, Slate, the Atlantic, East Bay Express, the Daily Dot, The Mary Sue, Tech Republic, Linux Magazine and on KCRW, National Public Radio, Australian Broadcasting Corporation and the Canadian Broadcasting Corporation. Additionally, she serves on the Board of Directors the Fort Ross Conservancy.